Soft City consists of three low-res photographs documenting a site-specific installation of an architectural model of Los Angeles, made from prefabricated white bread. Situated in the Mojave desert, the bread model slowly eroded by force of the two dominating elements in the desert - sand and sun. The museum installation is accompanied by a voice recording of diary entries, written on the day the original installation was built in the desert. 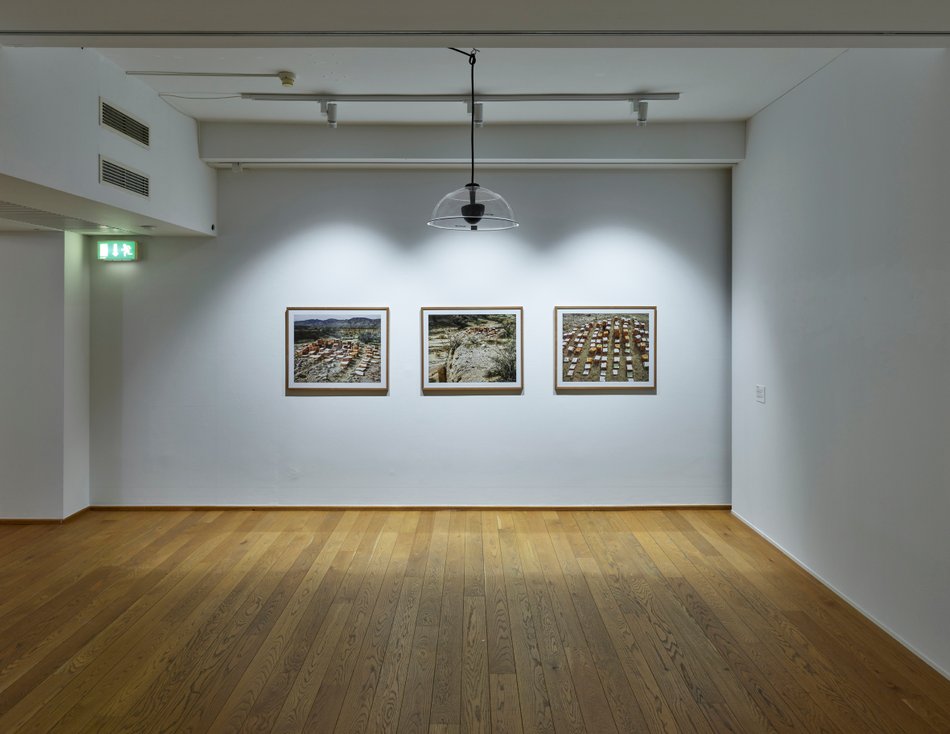 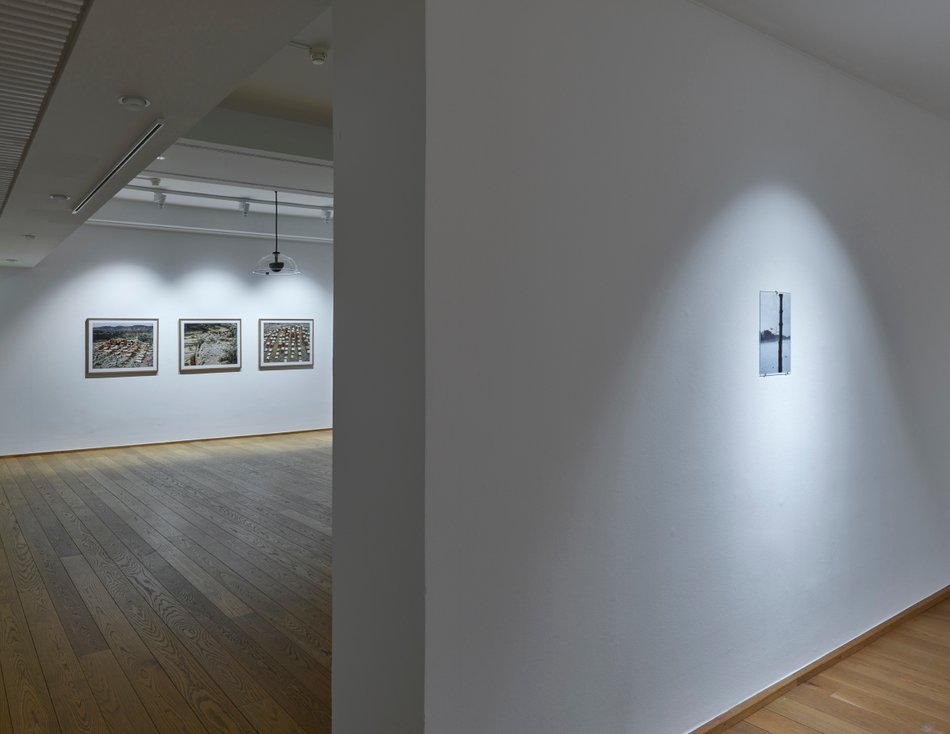 Cooled down cities in the desert, freezers for humans, where perfectly round, green apples are grown for world export all year around. Seasons don’t exist here, seasons like spring, summer, fall and winter belong to the movie sets here. It’s the perfect climate for produce, a stable ground-zero environment, a springboard for the fictional, which expands into every corner of the city. LA is an atomic bomb of a grid-city, smashing the ice cold silence of the desert. LA is a dash of salt and pepper on the indifference of its surrounding sand fields. The desert doesn’t care about anything - not even itself. LA is a soft city. Spongy, smooth, sweet and crunchy like the peanut butter-jelly-sandwich I got at the diner after being picked up from the airport. If the desert doesn’t care about anything, if LA doesn’t care about anything else than itself, if the sand, the sky, the dry wind, the inhuman heat doesn’t care — then who cares? The Aircon cares, electricity bills care, the gas station cares, the lonely diner with 60’s interior cares, the military bases care, the prisons care, the endlessness cares. The civilisation cares about the brutality of the desert, because the inability of the desert creates possibilities for investment, for smoothed out cityscapes created for cars and coffee to-go, peanut butter-jelly-lifestyle, banking and artificial rivers. Greenhouses, Death Valley and atomic waste. The desert doesn’t care about TV, but the TV cares about the desert because of it’s potential for fiction and romance, the impossible living, survival of the fittest, the disappearance into nowhere, the dead end and the shamelessly straight roads, with no intention of hiding its artificiality. The straight roads created for me, layers of asphalt poured out on sand, to enable my fantasy of a road trip. The trip down memory lane visiting my teenage TV-series, becoming Dylan and Brenda and Kelly and Brandon, while the desert spins around outside the car window.  The desert enhances the Disney-like gloss which is coating my understanding of love and trouble, parties, drug abuse and good looks. There’s always a cliffhanger - both in Beverly Hills 90210 and in the desert. There’s always another step to make into the sand, another episode to daze away to tomorrow afternoon. But then who am I amidst all this brutal nature and brutal soft-city-living, while realising that both Dylan and Brenda and Kelly and Brandon aren’t actually here - they’re gone but everywhere. There isn’t anyone but Dylan and Brenda and Brandon and Kelly out there. That’s when I turned to Baudrillard. While sitting on the passenger seat of the car which my partner is driving all too fast for my taste, while we’re passing through Las Vegas and I beg them to pass through as quickly as possible because my forehead is breaking into halves from all the blinking light, the sea of casinos, the multitude of broken dreams, the whole wide world as an amusement park. While it is all too much for me to comprehend, while we leave Las Vegas and return to the escape of the desert, that’s when I turn to Baudrillard. I turn to someone who explains to me the madness, the brutality, the simulation of my own cognition of reality. I turn to Baudrillard to bear the brutality. Not the brutality of the desert, but the brutality of who laid out the asphalt and created these bloody roads. I don’t know who came up with the brilliant idea of prisons in the desert - it makes all too perfect sense - the amalgamation of a nature which doesn’t care about anything at all, and a societal system with orange prison suits growing together with the skin of it’s inhabitant. It creeps me out, but it’s not the lonely wolf in the desert who scares me, I’m afraid of the bed bugs other people brought to my hotel room, and what if I bring them with me? Bring them home? I’m afraid of my teenage world falling apart right before my eyes, of being swallowed by the promise of ‘life is what you make of it’ and ‘every man is the architect of his own fortune’. Because most likely my fortune is well designed, but who paved the highway for me? I dive into Baudrillard to understand the brutality of the soft-city living. And I find it somewhat comforting to know that the land which was stolen with brutality, was also build from brutality itself. The facades were painted with brutality, the grid city held together by brutality. The pillow on which I rest my head turns brutally soft, the candy and the squared, white bread sponging around on my tongue turns brutally sweet, and I understand that I eat it because it’s convenient - not because of hunger. On the go I’m rarely hungry, but snacking I always want to do. And in the car it’s convenient to eat a sandwich. It’s lovely, it’s delicious and it makes me want to eat more. Because after sweetness I want salt, and after salt I want coffee and with coffee comes the cigarette, so we have to make a stop, because the car is leased and my partner doesn’t want to risk a fine for the smell of cigarettes in a non-smoking car.

When we stop the car the newfound ease I gathered after the shock of Las Vegas, disappears like a drop of sweat on my sun burned skin. It was the speed that made everything come together. The speed, the constantly on-the-go-mentality, my body racing through brutality while listening to Madonna on the radio. In motion, in speed, on the go, the plastic made sense, the sandwich made sense, Madonna made sense, the brutality of the sweetness wasn’t bitter yet. But now, with my feet planted on the ground, in stillness, it is all falling apart. The fatamorgana of LA far on the horizon is suddenly gone. LA seems more dead than Death Valley, it turns into the glutinous bun it is. The glamour is gone, it is covered in drought and water restrictions, cactus gardens, broken hearts and bad acting. I’m confronted with my own thirst for escape, but I need to get back into the fatamorgana in order to see it again, I need to touch it to understand that the fiction is real, that reality is fictitious and the bread I am eating is indeed glutinous and that I am still gluten-allergic despite my temporary override of dietary restrictions. For the sake of convenience. For the sake of the real deal, the real burger, the real highway diner, the real smash in the head when I saw the Eiffel Tower in Las Vegas, before ever having stepped a foot in Paris. So I dump my cigarette butt and we continue to razor through the desert, while hoping we’ll make it back to the soft city before dusk turns to dawn.